Mexico’s Day of the Dead actually takes place over two days; All Saints Day (November 1st) and All Souls Day (November 2nd). There are many images associated with the celebration, some we’ve already mentioned.

One of Caoba’s favourites is Calavera Catrina, the Skeleton Dame or Elegant Skeleton. 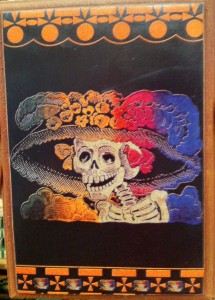 A retablo featuring Posada’s Catrina. From a range at Caoba

middle classes (and was said to bear more than a passing resemblance to the wife of Mexico’s then president). Much of Posada’s work was influenced by his contemporary, the lesser-known artist Manuel Manilla, but his famous series of satirical skeletons has embedded the character of Catrina as a Mexican icon, closely associated with the country’s national and cultural identity.

Caoba, Edinburgh carries a range of Catrinas represented in various forms; from greetings cards to fabric and most beautifully in a ceramic form almost too fragile to look at.

While researching the Catrinas I came across this article at huffingtonpost.com. It’s a comprehensive look at the Day of the Dead and makes fascinating reading if you want to learn more.